Branko Milutinovic and two of his friends left fulfilling jobs with Microsoft 11 years ago in Denmark to return to Serbia. They invested their savings in founding Nordeus, which has become one of the western Balkan region’s biggest gaming companies.

Coming back to Belgrade was a “no-brainer”, says Mr Milutinovic, 37, chief executive of Nordeus. It operates out of smart new offices in a tech hub in New Belgrade, the Serbian capital’s central business district.

“We felt really confident about moving to Belgrade because of the solid tech talent in the country and the region,” he adds. Mr Milutinovic and his fellow Nordeus founders, Ivan Stojisavljevic and Milan Jovovic, own the company.

Within a year, the game they built, Top Eleven, in which players act as football team manager, became the most played sports game on Facebook. A decade on — longevity rare in the online gaming world — it is available in 30 languages. José Mourinho, manager of English Premiership football team Tottenham Hotspur, is a brand ambassador. 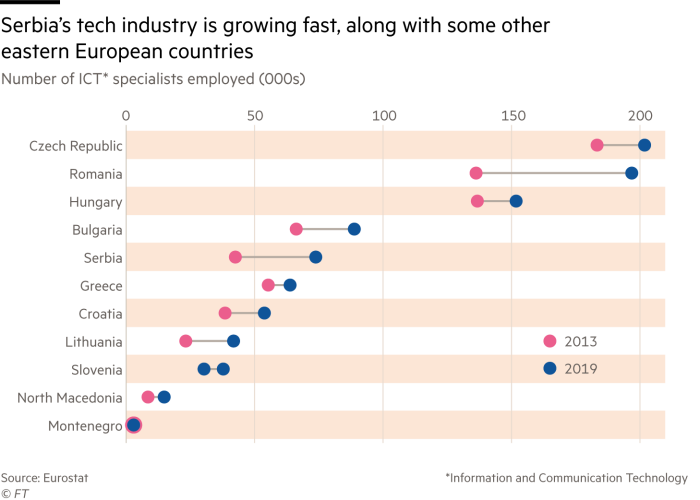 Many tech entrepreneurs have set up companies in Serbia in the past decade. Belgrade’s start-up scene — and nightlife — are often compared with Berlin’s.

“It has evolved a lot,” says Mr Milutinovic of the Serbian capital. Especially so in the gaming industry, though there is a “wide diversity of sectors and business models”. The local market for tech talent, he adds, “resembles the global hunt for talent”.

“Serbia is still in the early stages” of establishing itself in the start-up world but growing fast, says Zoja Kukic of Digital Serbia Initiative (DSI), a non-governmental organisation promoting the industry. The country’s tech sector employs about 75,000 people, according to Eurostat.

Kosta Andric is managing director of ICT Hub Venture in Belgrade, founded two years ago as the first private investment fund focused on early-stage start-ups in south-east Europe. It is presently funding 15 start-ups in not only gaming, but fields as varied as human resources management and cyber security.

Serbia’s recent history, with the painful collapse of Yugoslavia in the 1990s and years of international sanctions, have made its people resilient, says Mr Andric. “We have a problem-solving mindset.” Investors have a choice of going to “compete somewhere that is already crowded”. Or opting for somewhere like Serbia, “where things are still untapped”.

Microsoft opened a development centre in Serbia 15 years ago. Now it employs 300 people. In Belgrade, its developers built Azure, the cloud platform, as well as research and machine learning technologies.

“It is starting to look like what we see in Seattle,” says Dragan Tomic, chief executive of Microsoft’s development centre in Belgrade. “It is not as big necessarily, but it is as well rounded.” One reason for that, he says, is Serbia’s decision to incorporate tech education into curricula from primary school and onwards. In 2017, coding became compulsory for all students from age 11.

As well as having many so-called “repats” — those returning from overseas — Serbia’s tech workforce is one quarter “digital nomads” from abroad. Last year, the UN Development Programme launched UNDP Accelerator Lab in Belgrade (see a lab workshop pictured below) among the first tasks of which is to map what determines whether Serbian tech employees stay, leave or return home, and what attracts digital nomads to the country.

“Serbia has one of the fastest-shrinking populations in the world,” says Kristina Jazinka Nikolic (see below) the lab’s head of experimentation, who also co-founded a start-up making smart furniture that harnesses solar energy. “We need to understand what kind of knowledge we are losing,” she adds, and what can be done to keep it.

Many Serbs moved abroad in recent decades to make a living and there are hopes that a good number of the hundreds of thousands who returned home, as the Covid-19 pandemic took hold in March, will remain. Serbia’s President Aleksandar Vucic has appealed for them to do so. Tech experts say Serbia offers employees and investors more stability than other technology centres.

“Culturally, there is more hunger for success in this part of the world than in some others,” says Mr Milutinovic. “This contributes to a high sense of belonging,” with employees staying in jobs longer compared with other start-up hubs.

“Serbia is a good place for people and investors interested in a long-term perspective,” agrees Mr Tomic.

“Serbia’s tech sector is starting to look like what we see in Seattle. Not as big, but as well rounded”
Dragan Tomic

Igor Bogicevic is co-founder of Seven Bridges, a biotech company with offices in, among other locations, Belgrade and Boston, Massachusetts, and Orgnostic, a human capital analytics platform in Belgrade. The latter location, he notes, offers the higher prospects of retaining top talent in spite of the brain drain.

The Boston area of the US may be one of the world’s biggest hubs for biomedical start-ups, he notes, but the decision to have a base in Serbia enables advantages not only in terms of “the cost of talent”, but also availability. He also points to the case of companies in Silicon Valley, where “the usual tenure of people” is nine months. Given that “you need three to six months to fully onboard an employee, this pace is not sustainable for a company like ours”, he says.

Serbian law needs to catch up with the borderless world of tech entrepreneurship. Some regulations make it complicated for start-ups to operate as they do elsewhere.

Restrictive foreign exchange rules, for example, are referred to by Ms Kukic as “the Berlin Wall of the digital ecosystem”. However, some regulation has been easing. The Digital Serbia Initiative has successfully lobbied for curbs on start-ups giving employees stock options to be lifted.

Mr Tomic argues that the development of the tech scene in Serbia has led to an improved image for his country. In turn, that will benefit the industry itself.

“The PR for Serbia in the past 30 years has been horrible,” he concedes. “But we are well on our way to rehabilitating our image. Once that happens we will make a great quantum leap in the tech sector.”